Have you ever thought this thought or known someone who has? It’s more common than you might think. One of the curious things about the spiritual seeker is the preconceived notion of what someone looks/acts like when they are awake or enlightened. Many believe that a person who is enlightened will be in constant bliss, always calm, always smiling…on and on. But is that true? One of our foremost and well-known spiritual leaders, Jesus Christ, was known to get angry and knock over a table now and then. So does that make him less awake than he is depicted in the Bible? In truth, it makes him a very good example.

When awakening happens, yes, it does bring about a certain calmness, a certain contentment with everything that comes. You see that everything is right, just the way it is. What it doesn’t mean is a loss of personality. What it doesn’t mean is that you will necessarily “like” everything that happens. There is still an attraction to certain things and a repelling from others, kind of like a magnet. Certain energies will flow together more than others.

Will there still be emotion? Of course. It’s the identification with the emotion that fades. It becomes more a movement of energy instead of something you own, and it doesn’t come from thought. For example, I still see an anxious energy arise sometimes before I give a talk or teach a class but instead of getting wrapped up in it, I step back from it and observe it flowing and essentially watch it fade away. I don’t identify with it and I don’t attach to it. I observe it arise and I observe it fade. I don’t try to control it or change it. I just observe it, appreciate it, watch it fade.

There is no mold. An awake or an enlightened person may be the man who spends the rest of his life in a secluded cave in silence. It may be the person who finds solitude in a cabin in the woods. It may be the woman who leads her own Sangha to point others in the direction of their own awakening. It may be the grocery store clerk who scans your items and takes your money. It could be the old yogi who smokes 3 packs of cigarettes a day and grumbles at the ignorance of his followers. It may be the gas station attendant. It may be that old oak tree in your back yard. It may be you. There is no mold to fit. An awake being can take any form and can perform in any way. It’s not up to you and it’s not what you think.

(And I’ll add that the awakening process itself can be a quite messy affair. It isn’t usually some instantaneous snap of the fingers where the clouds open up and the angels sing. It’s not always light and glorious. Most of the time it’s messy, confusing and can look like a complete mental breakdown to an unfamiliar observer.)

So check in with your conceptions now and then. Because we can never know the expression the universe has in store for us, until we let it happen. 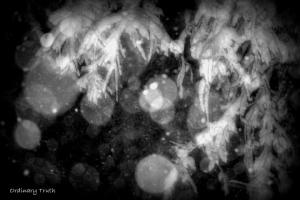